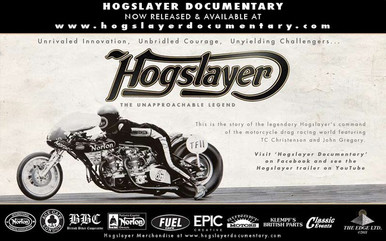 Hogslayer - The Unapproachable Legend is an award-winning documentary based on the true story of the legendary dual-engine Norton Hogslayer's command of the motorcycle drag racing world. "Hogslayer" features the Sunset Motors race team drag racer TC Christenson and crew chief John Gregory - bench racing at its best from the original Sunset Motors in Kenosha, Wisconsin, home of the Hogslayer. Experience the life and times of their remarkable accomplishments as the Hogslayer captured multiple world championships in the 1970s. (Running time: 66 Minutes)Tom C. Christenson - the little guy with the big reputation, who blew away the
Harley-Davidson's and took no prisoners on his Norton powered 'Hogslayer' when it
dominated the American drag strips in the Seventies. On October 8, 2005, TC was
inducted into the Motorcycle Hall of Fame.

Check out the Hogslayer movie trailer below.